Link to this page

A Hawking Party c. 1651
Order a Hand-Painted Reproduction of this Painting 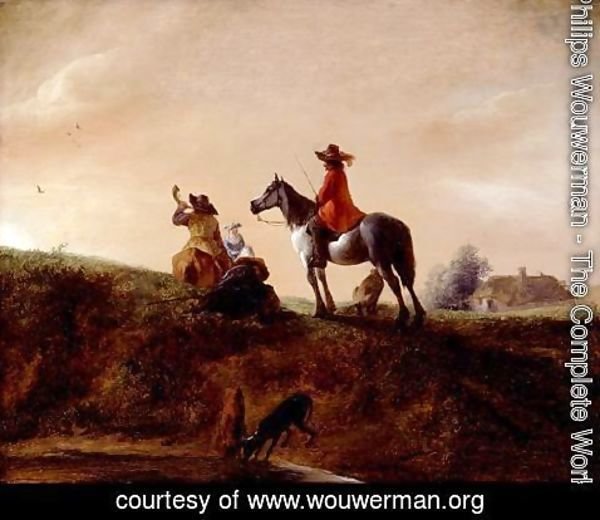 Philips Wouwerman(s) was undoubtedly the most accomplished and successful Dutch painter of equestrian scenes in the 17th century. Even so, neither a critical study of his work nor a documented biography has been published. The present essay not only presents the results of archive research but also outlines his artistic development. Besides the seven dated pictures by the artist known by Hofstede de Groot, several others have been discovered.

Wouwerman was born in Haarlem, the eldest son of the painter Pouwels Joosten and his fourth wife, Susanna van den Bogert. Two other sons, Pieter and Johannes Wouwerman, were also to become painters. Wouwerman's grandfather originally came from Brussels. Philips probably received his first painting lessons from his father, none of whose work has been identified however, making it impossible to determine the extent of his influence on the son's work.

According to Cornelis de Bie, Wouwerman was next apprenticed to Frans Hals. He is subsequently reputed to have spent several weeks in 1638 or 1639 working in Hamburg in the studio of the German history painter Evert Decker. In Hamburg he married Annetje Pietersz van Broeckhof. On 4 September 1640 Wouwerman became a member of the Haarlem painters' guild, in which he held the office of vinder in 1646. In the following years his presence in Haarlem is mentioned repeatedly. In view of the many southern elements in his landscapes it has frequently been suggested that Wouwerman travelled to France or Italy. However, there is no documentary evidence of his having left Haarlem for any length of time. Wouwerman died on 19 May 1668 and was buried on 23 May 1668 in the Nieuwe Kerk in Haarlem. He evidently attained a certain degree of prosperity, going by the relatively large sums of money each of his seven children inherited on his widow's death in 1670 and by the various houses he owned. No confirmation can be found of Arnold Houbraken's often quoted remark that Wouwerman's daughter Ludovica brought a dowry of 20,000 guilders with her in 1672 when she married the painter Hendrik de Fromantiou (1633/34 - after 1694). 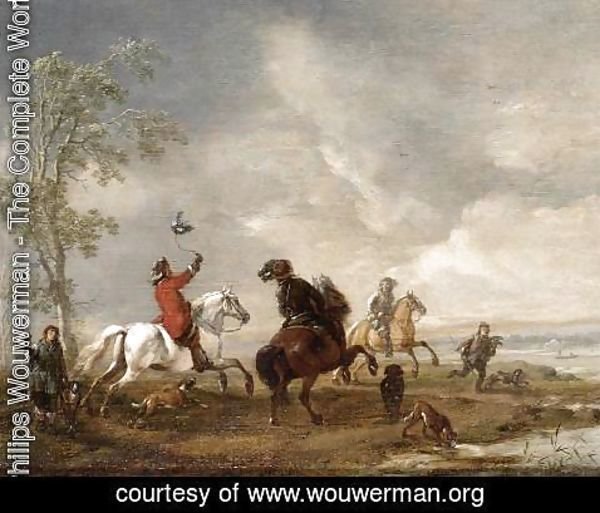 Wouwerman's oeuvre consists mainly of small cabinet pieces with horses, such as battle and hunting scenes, army camps, smithies and interiors of stables. He also painted sensitively executed silvery-grey landscapes, genre pieces and a few original representations of religious and mythological scenes. Wouwerman was also exceptionally prolific. Although he only lived to the age of 48, more than a thousand paintings bear his name. Even when one bears in mind that a number of these paintings should actually be attributed to his brothers Pieter and Jan, Philips left an extraordinarily large oeuvre. Only a small number of drawings by his hand are known. His pupils include Nicolaes Ficke, Jacob Warnars, Emanuel Murant and his brothers Pieter (1623-1682) and Jan Wouwerman (1629-1666). He had many followers and his paintings were much sought after in the i8th and early 19th centuries, especially in France. Important collections created during that period, including those which form the nuclei of the museums in St Petersburg, Dresden and The Hague, all contain a large number of his works. Establishing a chronology with respect to Philips Wouwerman's work is extremely problematic. His extensive oeuvre notwithstanding, only a comparatively small number of paintings are dated.

The style of the signature enables us to date pictures only within wide margins: the monogram composed of P, H, and W was only used before 1646; thenceforth he used a monogram composed of PHILS and W. Wouwerman's earliest dated work, of 1639 (sale London, Christie's, October 10, 1972), is of minor quality. However, during the 1640s his talents improved rapidly. During that period he was strongly influenced by the Haarlem painter Pieter van Laer (1599 - after 1642) with respect to both style and subject matter. This tallies with Houbraken's remark that Wouwerman laid his hands on sketches and studies by Van Laer after that artist's death. Van Laer's influence is evident in Attack on a Coach, dated 1644, in the collection of the Prince of Liechtenstein, Vaduz. Several figures and details are quotations from works by Van Laer. 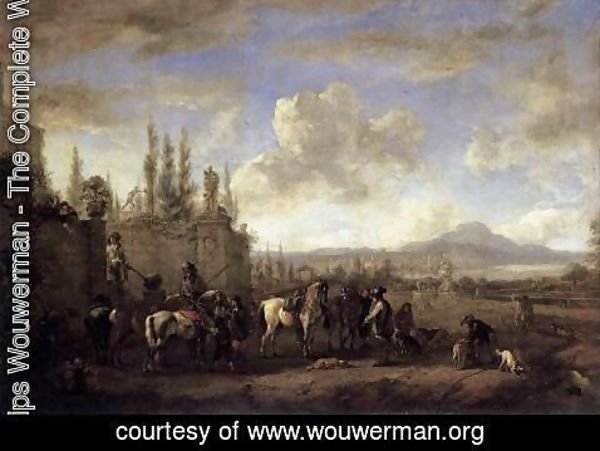 Most of Wouwerman's compositions of the mid-1640os are dominated by a diagonally placed hill or dune covering most of the horizon, a tree - often dead - as a repoussoir and a few rather large figures, usually with horses. Landscape with Peasants Merrymaking in front of a Cottage in the City Art Gallery, Manchester, Battle Scene in the National Gallery, London and Landscape with a Resting Horseman in the Museum der Bildcnden Kunste, Leipzig, all dated 1646, are proof that Wouwerman gradually developed his own style; nonetheless, Van Laer continued to be an important source of inspiration. (From IngentaConnect)

Report an error on this page